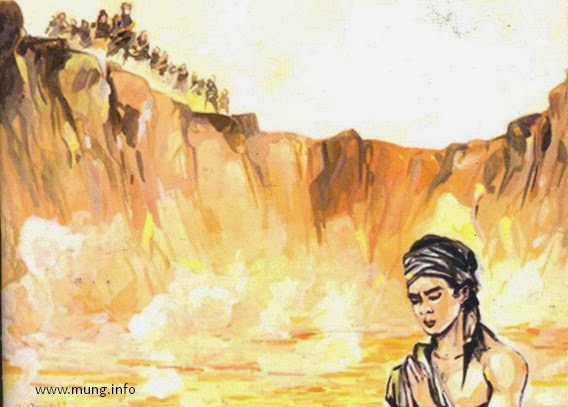 Once upon a time on  Majapahit kingdom, led by a wise king and his consort good . They have a beautiful daughter named Roro Anteng . she has married with Joko Seger , the son of a Brahmin handsome and good-natured . They live on the slopes of Mount Bromo Tengger named combination of Anteng and Seger . They live happily , but after many years of marriage , they were never given a child .


18 years passed . Now , Joko Seger and Roro have 5 children . Kanjeng Lara, Joko Berto,Purbaningrum , Arimbi ,Patmini . A few days later , in the early morning residence Roro and Joko Seger visited by a mysterious person . Her dress all in black and carrying a stick . He walked slowly . When it Roro Anteng being swept in the yard .

Roro into confusion , he kept thinking about this mysterious woman . For some reason , his premonition became uncomfortable . When her husband returned home , he spoke in secret with her husband .

The next day the atmosphere in the residence Joko Seger and Roro Anteng not happy as usual . Everything dizziness problems and dilemmas will be who will be the casualties . Joko Seger and his wife was depressed in the living room . While the children who already know it , too confused and restless will issue it .

They spent the morning welcoming . There was a knock the door , it's definitely women who will usher in the Nyai Roro Gendeng .

Finally , all ends happily . Patmini be taken to heaven Goodness Goddess , spreading kindness in the face of the earth . While his family in Tengger , every year when the first rains Month Kashada give up some results for Patmini pertanianya . From heaven , Patmini always feel happy to see his family live peacefully in Tengger .

Back to top!
Copyright 2013 Mung Informasi - All Rights Reserved Powered by Blogger